A portable hybrid solution for an off-grid, smart waste-to-energy and waste-water treatment 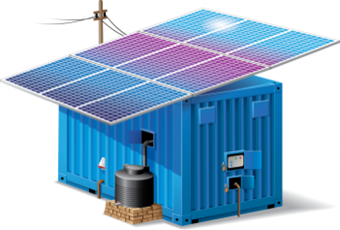 The KUDURA “waste-to-energy-and-water” solution it is composed of various modules for the provision of renewable electricity, co-generated heat and clean reusable water from cattle and pig manure.

Small pig and dairy farms are more common in the Eastern European as well as in the Mediterranean countries (Poland, Romania, Bulgaria, Greece, Italy, in parts as well the Iberian island), while in other central and western European countries such as Germany, Czech Republic, France or the United Kingdom the average size of farms is significantly higher. In a large part these rather small farms lack the financial budget to obtain a biogas gasification plant or a water purification station.

Producing pig meat and dairy products are energy intensive processes, consuming up to 16% of the whole consumption in the agricultural sector as well as high quantities of water. Cow and pig farms produce enormous quantities of waste; in European Union, pig farms alone produce 298×106m3 of slurry per year causing odour and water pollution when inappropriately treated and disposed. As animal manure is classified as high-risk waste (Regulation No 1069/2009), the European Union bans the landfilling of organic and high caloric value material from 2013 (directive 2008/98) and requests for specific treatment, especially encouraging the production of biogas from manure, slurry and other organic waste.

With the KUDURA system the EU objectives are tackled by reducing the waste, using sustainable renewable energies and by reducing greenhouse gas emission levels while providing farmers with an all-in-one solution for water reuse and renewable energy independence.

KUDURA is an integrated and standalone container which is flexible in size, function and location and easy and quick to install (<120 hours), providing farmers with a cost-effective solution that reduces not only waste management costs, but also those related to energy and water consumption (up to 8% of total cost).