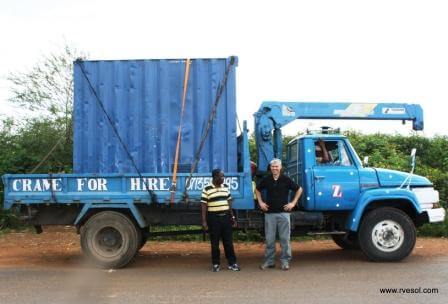 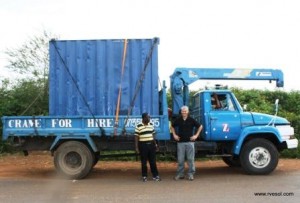 It’s been over 4 months since Vivian sent Kudura off at the port of Portugal. At the time it was known as the RVE unit (or Papa’s blue box as, Vivian’s 3yr old son refers to it). It’s journey saw it pass through Antwerp – Belgium, Palma de Mallorca -Spain, Luanda – Angola, Cape town and Durban – South Africa and finally docked at the port of Mombasa, Kenya on Sept 14th. Then the real battle began trying to get Kudura cleared through customs. After several phone calls, sleepless nights and camping outside offices, on the 30th of October, 2011, we finally got the letter from the Ministry of Finance exempting Kudura from import taxes, and on the 31st, another letter from the  Ministry of Industaralization and the Kenya Bureau of Standards giving Kudura the clear to officially be in Kenya. Kudura finally left the port of Mombasa on Mon 31st on the back of a truck, to make the approximately 940KM journey to Sidonge. 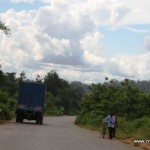 Spotted blue box. Could it be KUDURA?

Vivian, Hannington and I departed Nairobi at 6 30am Wednesday. Some 7 hours later, about 60km outside Sidonge, Vivian spotted a blue box on the back of a truck. With bated breathe, we we couldn’t wait to get closer to see if that was our blue box. Sure enough it was. Excitement, Relief, and a mix of other emotions filled the car. The joke off course was that Vivian managed to leave Spain, cross the ocean and catch up with a truck that was travelling within the country.

We were met by Alele (the chairmain of the Sidonge Self Help Committee) who said “people don’t understand that things that come from abroad take 6 months or more.” The whole village has been waiting anxiously for the arrival of Kudura. 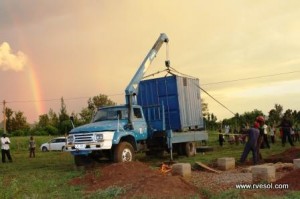 It was a beautiful moment when we finally 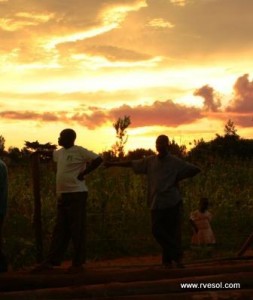 got to the grounds. The rains had just passed, a beautiful sunset was coming in with a rainbow in the horizon. A crowd quickly gathered around the site. In theory what seemed like should have been a very easy task of lifting Kudura off the crane and placing her onto the stilts, turned into a gruelling task. The crane has seen better days. It turned into a village effort, able bodied men lending a hand to help in balancing her. Two and a half hours later, a damaged pedestal but no broken limbs, we finally got Kudura situated in her new home. 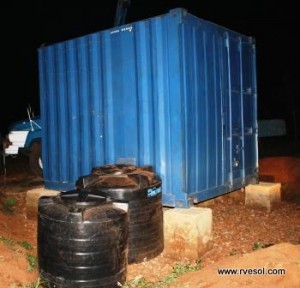 A lot of work has been going on at the site since. Stay posted for updates.