Jobs and opportunities in Sidonge

Jobs and opportunities in Sidonge 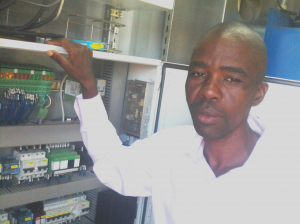 I am called Stephen Nakholi, the Project Coordinator of the Sidonge Kudura Project which has been in existence since 2011.

I am charged with the overall oversight of the project under the management of the Sidonge Community Self Help group which has been running the project since it’s conception. With the triple action benefit the project provides, its impact on the community has been life changing.

Charged with ensuring raw water is fetched for purification and also dispenses and sells the purified water.
Also charged with overall site maintenance and oversee the agricultural demonstration plots on the site.

Charged with charging phones and also shaving and hair cut.
This the only facility offering these services in a radius of roughly 3 km and has helped locals a lot, used to walk distances to get these services. 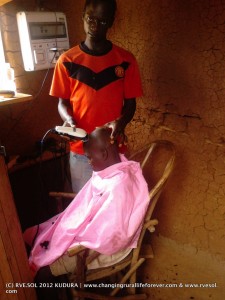 We have recently launched a recreational video Hall facility on the site and it has come as a huge relief to mostly soccer lovers who used to walk sometimes as far as 15 km to watch their favourite clubs playing. We are subscribed to the premium bouquet on dstv so all games that matter are always beamed live using a projector on wide screen.

Charged with overall security of the site, in collaboration with the Vendor who is on site during the day.

The lives of the above 5 staff members have changed drastically as they are now able to cater for their families and also invest in other small businesses for mostly their spouses. We are living, now, a better life than the one we used to live when we were still jobless. Our children attending schools uninterrupted, as we pay their fees on time, we have a healthier lifestyle and some have managed to save and construct permanent homes.

Overall in the community, our services have made life easier for the locals as we provide main basic services of phone charging, hair cut services and provision of purified water at a cheaper price.

Health wise, due to reduction of consuming unsafe water, the incidences of water borne diseases have reduced so much, according to reports from the nearby health facility.

According to data from nearby schools that serve the Sidonge area, the educational standards of pupils and students from homes provided with our electricity, at the moment the major national power supply company, Kenya Power and Lighting Company, has yet to connect Sidonge with power so most rely on our services, have improved drastically and this is attributed to longer study times as compared with study times for those using kerosene lamps.
We have hopes that given further funding, we could expand our provision of electricity to more homes and also introduce other value addition services and make the site a hub of economic activities at the site.

We hope for a continued support from the project Financiers and other willing sponsors to make a positive impact on this community in Kenya.